We arrived in Budapest late in the evening which can be disorienting when in a new place, but our kind driver, Stephen, pointed out the many lit monuments to help us get our bearings. Unfortunately, the well-known Chain Bridge was dark because its transformers were under water. Stephen explained there had been torrential rain in Central Europe that had caused major flooding. Budapest was on high alert as the Danube River was ten to twelve feet above its normal level, submerging the roads that run adjacent on either side.

Our charming hotel was located on the Danube River with a view of the Hungarian Parliament Building one way and the Chain Bridge the other. We watched as volunteers filled sandbags to shore up the river wall and protect the city. Although it came within inches, the water did not breach the wall and flood Budapest any further.

Budapest is a city of rich, ornate, layers. The normally gentle river provides the base. Elegant bridges connect Buda, the left bank that rises majestically to the Castle District, to Pest, on the opposite side that is home to the stately Hungarian Parliament Building.

Budapest has no shortage of impressive architecture. The exteriors are indeed commanding, but like an onion there are more layers to explore the deeper you look. Art, music, and culture permeate the interiors of the spectacular museums, churches, monuments, and the grand State Opera House.


Food adds another rich, flavorful layer. At a charming restaurant across from the State Opera House I enjoyed a simple plate of pasta with pesto sauce that was layered with peppery arugula (rocket), and shaved parmesan cheese, taking the dish to a sublime level.  Addison had Piglet Knuckle, a dish I would have never thought to order. I have a friend who used to order pork when we would dine out, but after biting into unpalatable hard bits that we jokingly called 'pig knuckles' she stopped ordering pork. Addison's pig knuckle was nothing to poke fun at. In fact, I was envious. I wished I had ordered it. The meat was succulent and juicy under perfectly crisp skin. It was served in a beautiful copper dish with sour cabbage and roasted potatoes. Addison has an uncanny knack for ordering the most tasty dish on a menu. 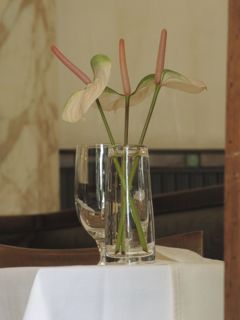 Gerbeaud is perhaps Budapest's most famous cafe. Its beautiful interior is as much a treat as its delicious pastries and ice cream sundaes. We escaped a sudden rain shower in this charming patisserie where we enjoyed decadent ice cream sundaes while we leisurely waited for the rain to stop. 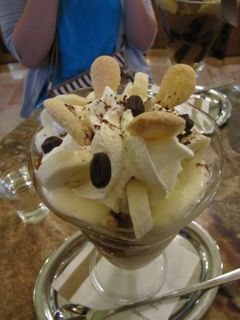 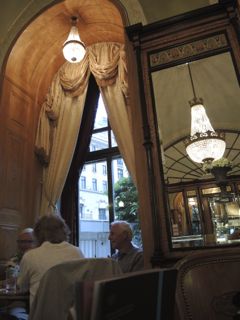 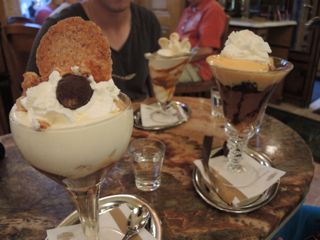 Perhaps one of the reasons I enjoy desserts and architecture so much is because of their similarities, both in form and in function. They each please in so many ways. They often mimic each other's shape as well. The ice cream sundaes had layers of flavors and their form had an architectural structure.

The macaron tower mirrored the shape of the chandelier nearby and the towers of the Fisherman's Bastion. 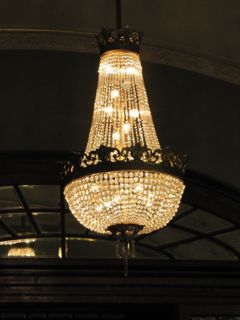 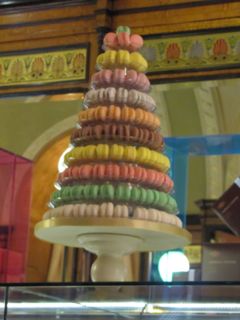 Perhaps the best layer of Budapest was its people. From our helpful driver, to our pleasant hotel staff, to the neighbors who gave their time to protect their city. Everyone was kind, helpful, and generous. We were even given a complimentary bottle of wine because of our 'inconvenience' due to the flooding. We were not inconvenienced at all, just the opposite, but the gesture was indeed kind and left us with even more fond memories of a lovely city. Thank you Budapest, you are a fine city indeed.