Without a doubt the happiest moment of our trip was when we saw Addison's smiling face waiting to greet us at the Warsaw Chopin Airport. The four months he spent studying architecture in Poland had felt especially long. We were eager to be back in his company and experience the life he had been living.

I did not really have any expectations about what I thought Warsaw would be like because I didn't do a lot of advance planning for our visit there. I knew Addison would be our tour guide, so I sat back and let him take the reins. He did a fabulous job, not that I would of expected anything otherwise.

Polish is a very difficult language. There are so many consonants. I can speak a little French, and a tiny bit of German, but I was completely lost trying to comprehend Polish. Addison had learned enough to get by. I was impressed with his effort and confidence leading us around. Warsaw has an efficient tram system that he navigated with ease. It was especially fun to visit the Politechnika Warszawski Wydzil Architecktury (Warsaw School of Architecture) and the Warsaw University of Technology where Addison had spent so much of the past few months and meet his kind professors and gracious Polish friends.


Warsaw has beautiful architecture, but much of it was destroyed during World War II. Most was meticulously rebuilt to its original grandeur. Charming and vibrant, Old Town and New Town are the most visited areas of Warsaw.


Warsaw is one of the few European cities to have a large part of the original city wall, begun in the 14th century, still intact.  Parts that were damaged during the war have been restored.

After enjoying the energy and vitality of the city it was nice to retreat to Lazienki Park. The deep wooded park has lovely buildings, gardens, and feisty peacocks. With all the old buildings in Europe there is always renovation or restoration being done. I love how they often camouflage the work with scaffolding that looks like what is behind it. If you look closely at the Palace on the Water you will see what I mean. 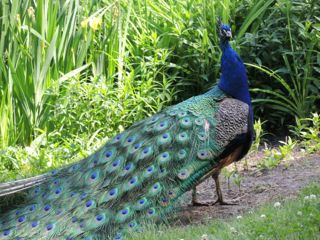 I suppose it is ironic that I write about food and yet I kept forgetting to photograph what we were eating. I usually remembered several bites in. The food in Warsaw was substantial, but very good. We ate delicious pierogies and beer, but only the beer made the picture.

The last night we were there Addison took us to a favorite restaurant of his - C. K. Oberza. I had kaczka feldmarszalka (Field Marshall duck). Wafer thin, crisp skin covered tender roast duck meat that fell from the bone. It was served with roasted apples, cranberries, and delicious red cabbage. It makes my mouth water just writing about it. Again there is no photo because I was too busy devouring it. If you happen to be in Warsaw go have the duck or their fabulous plate of sausages (Royal Board Meats) that Addison enjoyed. 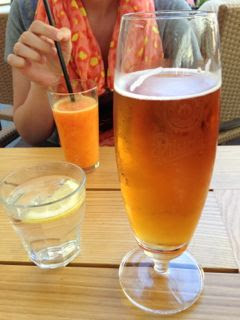 I have often joked that if Addison were a dinosaur he would of been a T-Rex because he is the carnivore of the family. Not surprisingly, I have the sweet-tooth. I am always in search of the best treats. But Maddie made one of the best discoveries in Warsaw - Grycan - an awesome ice cream store. Dare I say some of the best ice cream I have ever eaten. I don't say that lightly, as I have eaten a lot of great ice cream in my life. The flavors were so fresh and intense.

You could enjoy the ice cream or sorbet on a cone or in a delicate waffle bowl. Or go all out and order a decadent sundae. While Addison had discovered many wonderful things about Warsaw he had some how missed Grycan. He was sad to have found it at the end of his time in Warsaw.

Warsaw has a great feel to it. It is so alive and energetic. It is a big city, with a lot of people, but it doesn't feel crowded or over-whelming. There were tourists, like ourselves, but mostly it was just locals enjoying what all their city has to offer. Thanks Warsaw for a wonderful time.