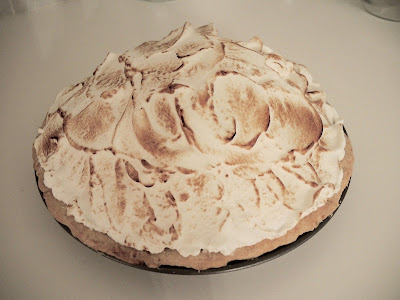 March 14th is Pi Day. It is just around the corner. What better way to share the love than to make a pie? With winter coming to a close and thoughts of spring break in warm locales swirling in our heads a tropical flavor seems the right way to celebrate. Looking back I've done a few pie posts: Cherry, Apple, Strawberry, an unconventional Sugar and an Apple Tart. It is time for something creamy and luscious and since I am sharing the love Toasted Coconut Cream Pie happens to be one of my father's favorites.

I think people either like coconut or they don't. I happen to love it, so this pie not only has coconut in the filling, it is in the crust, as well. Toasting the coconut first adds an additional rich, nutty flavor that is worth the extra step. When making the meringue heating the egg whites and sugar makes the meringue more stable and less likely to separate and becoming watery.

The recipe may seem long, but it isn't difficult. The crust and coconut custard can be made ahead of time. Leave the baked crust on the counter, but refrigerate the coconut custard (cover with plastic wrap on the surface of the custard) until ready to use. Make the meringue and finish the pie as close to serving as possible, but the pie will hold in the refrigerator for a few hours until ready to use. As with most pies it is best served the day it is made. 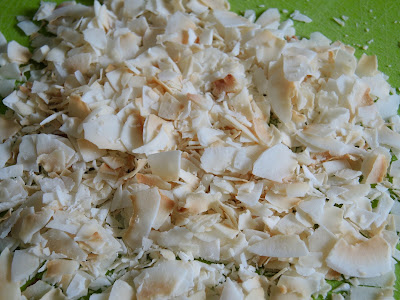 To toast the coconut:
Preheat the oven to 350℉ (175℃). Spread the coconut on a rimmed baking sheet. Toast in the oven for 5-8 minutes. Stir with a wooden spoon once after 4 minutes and again if needed a few minutes later. Watch closely as the coconut can burn easily. Allow to cool completely before using. Store in an air-tight container.

If the coconut flakes are large rough chop them into smaller pieces. Put the flour, coconut and butter in the bowl of a standing mixer. Mix on the lowest speed until the mixture looks like course meal. Stir the sugar and salt into the cold water to dissolve. With the mixer on low speed slowly add the water and mix just until the dough comes together.

Remove from dough from the bowl and knead together to form a disk. Working on a floured surface or between two pieces of parchment paper, roll the dough into a circle large enough to fit a 9-inch (23-cm) pie pan. Transfer the dough to the pie pan and trim to form a flat edge.  Refrigerate for 30 minutes. 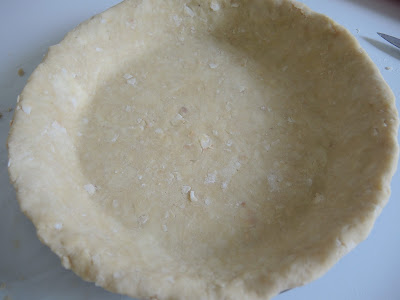 Preheat the oven to 400℉ (200℃). Line the pie pan with foil or parchment paper and fill with dried beans or pie weights. Bake for 15 minutes. Remove the beans/pie weights and foil/parchment paper and continue to bake another 5-10 minutes until the crust is golden brown. Watch carefully as the toasted coconut can burn easily. Remove from the oven and cool completely on a wire rack until ready to fill.

With a sharp knife split the vanilla bean down the middle. Scrape out the seeds. Put the vanilla bean and the seeds in a heavy-bottomed saucepan with the milk. Bring mixture to a boil. Add the coconut and simmer gently for 5 minutes.

While the milk mixture is simmering, stir the sugar and flour together in a heat-proof bowl. Add the eggs and whisk until light. Whisk a 1/4 of the milk mixture into the eggs to heat them. Pour the egg mixture into the saucepan with the milk and cook over medium high heat whisking constantly until the center bubbles and the mixture is very thick. Remove from the heat and stir in the vanilla extract and butter. Cool completely. 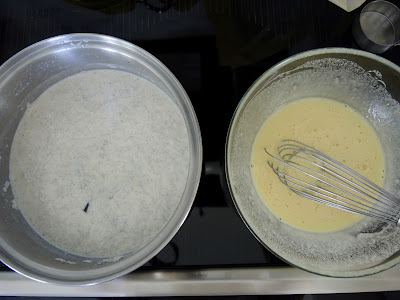 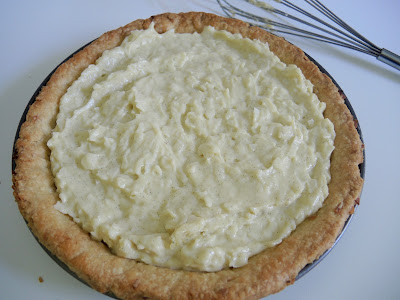 Put the egg whites and the granulated sugar in a metal mixing bowl. Place the bowl over a pan of simmering water (don't let the water touch the bottom of the mixing bowl). Whisk the mixture until the sugar is dissolved and the mixture is hot, thick and foamy, 2-4 minutes. Remove from the heat and beat on medium high speed until the meringue is stiff and has cooled. Add the vanilla extract and beat to incorporate. 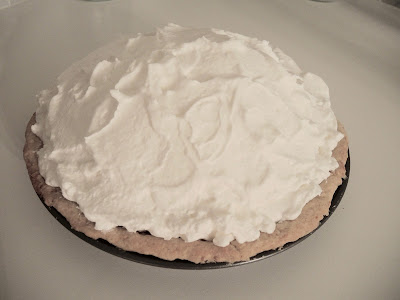 Spread the cooled meringue over the coconut custard. Swirl the meringue to make an attractive finish. Toast the meringue with a kitchen torch. Serve immediately or refrigerate until ready to serve. The pie is best the day it is made. 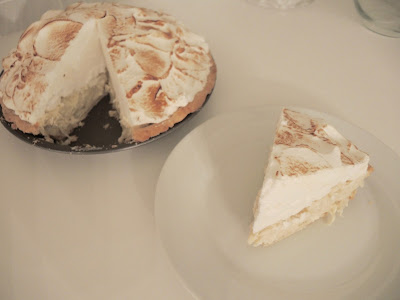 Posted by Kitchen and cake at 4:28 PM