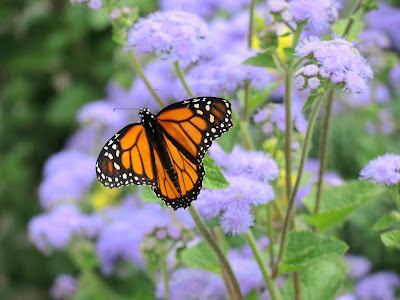 They say you start to mourn the loss of someone well before you lose them.  While I know this to be true from personal experience I also feel you start to mourn changes to your life long before they happen...  like when your children prepare to leave the nest.  Letting go is hard, but as a parent it is part of the job description.  Watching this butterfly flutter from flower to flower on Madeline's college campus was a gentle reminder that it is time for my children to fly and be free. 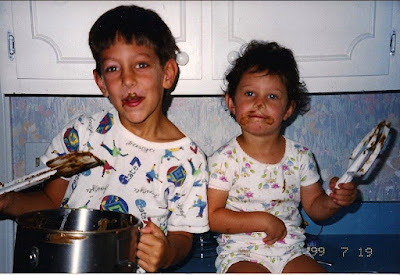 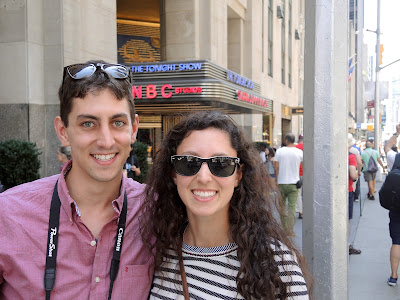 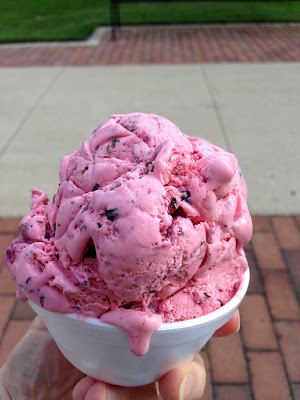 I know I should not use food as comfort, (who am I kidding we all do from time to time), but during this truly bittersweet time I found myself taking more solace than I care to admit in the ice cream at Maddie's school's creamery to help me let go of her. 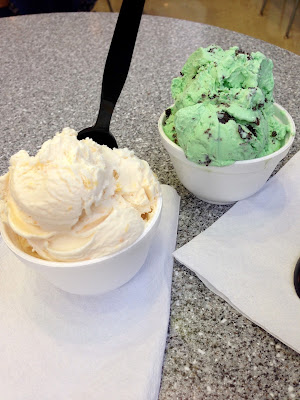 The creative flavors and generous servings took my mind off matters for a while. 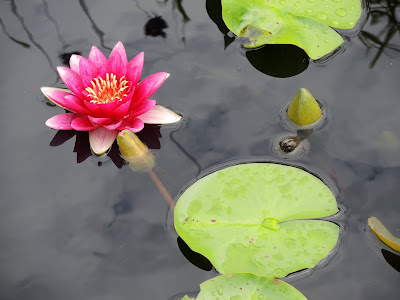 Wandering around the school's beautiful arboretum also brought me comfort and needed exercise after all the ice cream I consumed.  The calming lily ponds and soothing colors brightened my spirits. 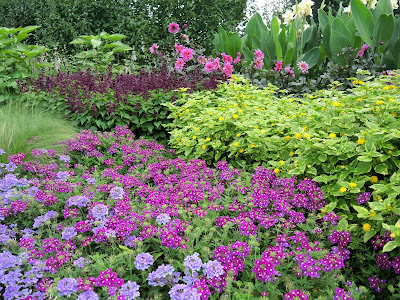 The charming children's garden with vegetable and fruit beds and pint-size watering trough brought me smiles as I reminisced about Addison and Maddie's childhood years. 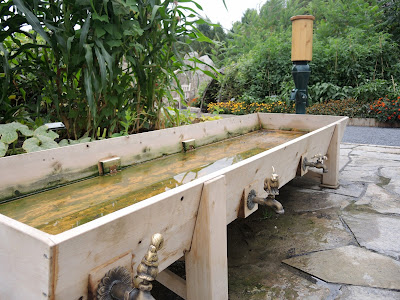 On the long, lonely drive home I realized I may have a rocky road ahead while I adjust to a quiet house, but a little ice cream might make the journey a bit sweeter.

The Toasted Vanilla Bean Marshmallow Rocky Road Ice Cream recipe looks long (the name sure is), but it isn't complicated and it can be done in stages.  Make the chocolate ice cream base and refrigerate it until ready to freeze in the ice cream maker.  This can be done up to two days ahead. The marshmallows can be made in advance as well.  Don't toast them until ready to add them to the ice cream, but they can be stored un-toasted in an airtight container for up to a week. The pistachios also can be toasted and chopped in advance.  Store them in a glass jar in the refrigerator until ready to use.

The chocolate ice cream is delicious on its own, so if you aren't a marshmallow fan leave them out and just make the ice cream.  Homemade marshmallows can be sticky business to make, but they taste so much better than store-bought.  Toasting them with a kitchen torch before folding them into the ice cream gives the ice cream a s'mores taste.  I used pistachios because I like their flavor with chocolate, but any nut will do, just make sure to toast them in the oven first to bring out their nutty flavor. 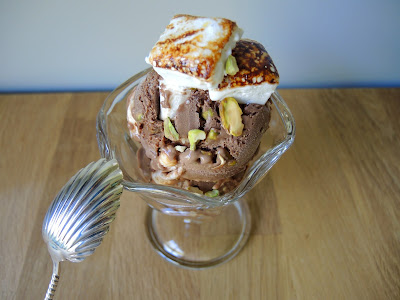 In a medium saucepan whisk the heavy cream and cocoa powder until thoroughly blended.  Bring to a boil, then reduce heat to low and simmer for a minute stirring constantly.  Remove from the heat and add the chopped chocolate.  Let the mixture sit for a few minutes then whisk until smooth. Pour the mixture into a large bowl scraping the saucepan as clean as possible.  Put a mesh strainer over the bowl with the chocolate mixture and set aside.

Put the milk, sugar and salt in the same saucepan heat until warm.  In another bowl whisk the egg yolks.  When the milk mixture is warm remove from the heat and add a small amount to the egg yolks whisking to warm them.  Continue slowly adding the milk until it is all incorporated.  Then return the mixture to the saucepan and heat gently over medium low heat stirring constantly until the mixture thickens and coats the back of a spoon.

Remove from the heat and pour the mixture through the mesh strainer into the bowl with the chocolate mixture.  Stir in the vanilla.  Cool the mixture over an ice bath stirring occasionally then refrigerate until very cold at least two hours and up to two days.

Whisk the cold chocolate mixture to combine and pour into an ice cream maker.  Freeze according to the manufacturer's directions.   While the ice cream is soft fold in the ingredients to make the Toasted Vanilla Bean Marshmallow Rocky Road Ice Cream see recipes below.  Then return to the freezer until ready to serve. 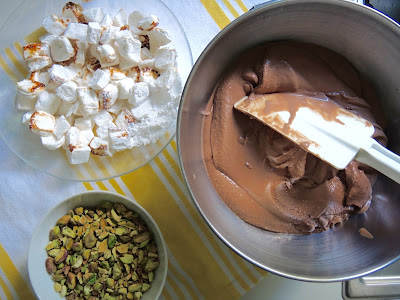 Cover a baking sheet with aluminum foil and sift a 1/2 cup (60 g) confectioners' sugar over the foil.

With a sharp knife split the vanilla bean in half length-wise.  Scrape out the seeds.  Put them in the bowl of a standing mixer fitted with a whisk attachment.  Add a 1/4 cup (60 ml) of cold water. Sprinkle the gelatin over the water let it sit to soften.

Put the granulated sugar, corn syrup, salt and remaining 2 tablespoons of water in a small heavy-bottom saucepan.  Bring the mixture to a boil over medium-high heat and cook the syrup until it reaches 250℉ (121℃) on a candy thermometer.  When the syrup reaches the temperature turn on the mixer to medium speed and slowly and carefully pour the sugar syrup in a thin stream in to the bowl staying close to the side of the bowl so the whisk attachment doesn't splatter the hot syrup. When all the syrup is added turn the machine to high speed and whip the mixture for 5-8 minutes until it is like a stiff meringue.  Add the teaspoon of vanilla extract and whip to incorporate. 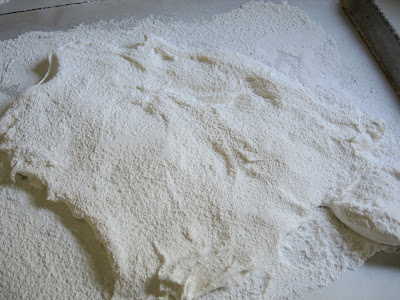 Spread the marshmallow mixture about 1/2 inch thick on the confectioners' sugar-dusted baking sheet.  Lightly dampen a spatula or your fingers to help spread the mixture.  It can be difficult to spread don't worry if it isn't perfectly even.  Let the marshmallows sit at room temperature uncovered until set, about 2 hours. 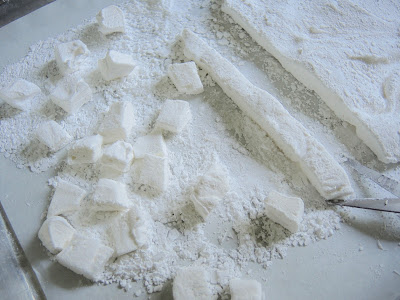 The recipe makes a little over 2 cups (120 g) of marshmallows, depending upon the size.  You will only need 1 1/2 cups (90 g) to fold into the ice cream so the additional marshmallows can used to garnish the ice cream or can be stored in an airtight container for a few days if toasted and up to a week if not toasted. 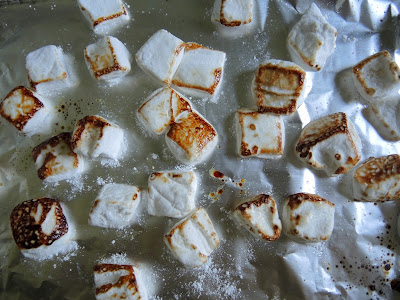 Using a kitchen torch toast the marshmallows on the baking sheet.  Put the tray in the freeze for a few minutes to make it easier to remove the marshmallows.  Don't worry if some stick together. They will come apart when you fold them into the ice cream.

Preheat oven to 350℉ (175℃).  Spread the pistachios on a baking sheet.  Toast in the oven for 5-10 minutes until slightly browned and fragrant.  Remove from the oven and allow to cool for a few minutes.  While the pistachios are still warm, but cool enough to handle rub them together between your hands to remove as much of the papery outer skin as possible and discard the skins leaving only the pistachios.  Allow to cool completely then rough chop with a knife and set aside until the ice cream is ready.

The Toasted Vanilla Bean Marshmallow Rocky Road Ice Cream is amazing on its own, but drizzle with my hot fudge sauce to make a sublime sundae. 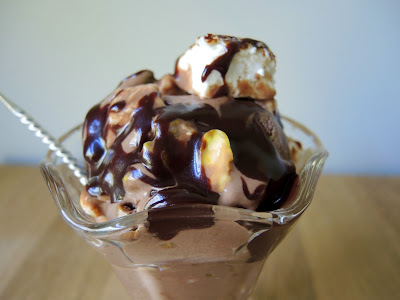