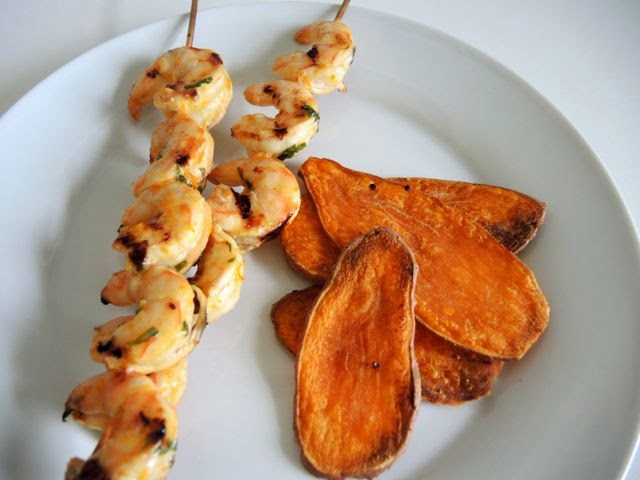 It was a long, cold winter. Using my big, fancy grill was a distant memory, as it spent several months covered in a deep blanket of snow. I suppose I could have swept the snow off and removed the cover to gain access, but first I would have needed to clear a path to it. It was just too much work when all I wanted to do was hibernate and hide from the chill. But alas good things come to those who wait. Now with spring in the air I can whip the cover off the unimpeded grill in seconds and fire the baby up. It is grill time.

During the winter I cook slow food that takes a long time for the flavors to develop, but when the weather gets nice I want tasty food on the table fast. I feel energized to make things happen quickly. This recipe fits the bill. While the shrimp marinates for a few minutes the sweet potatoes can be prepared and put in the oven. Right before the sweet potatoes are finished the shrimp goes on the grill. It doesn't take long for it all to come together.

The crisp, sweet potato chips complement the succulent citrus-scented shrimp. A mixed salad or green vegetable would round out the meal nicely. The recipes serve two, but can easily be doubled or tripled just add more shrimp and potatoes. You may need to make a bit more marinate for the shrimp. 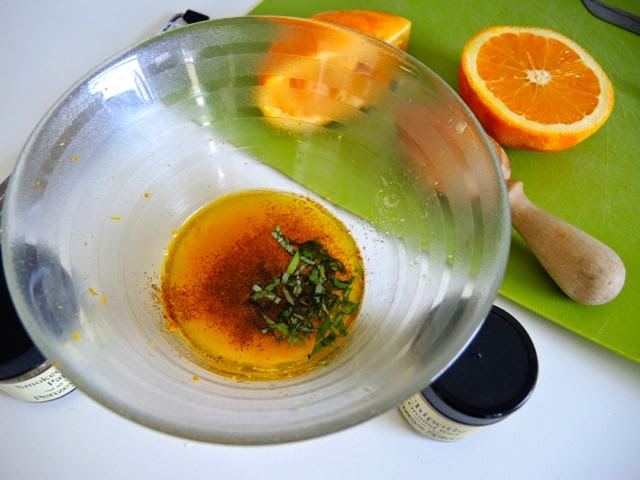 There is a certain someone in my family who will remain nameless who refuses to make a recipe if there are too many ingredients. I'm not sure what the cut-off is, but I'm pretty sure I have gone over the limit here. Let me assure you that the rather lengthy marinate list just adds more complex flavor to the shrimp. If you feel over-whelmed by the number of ingredients, forgo measuring and just add dashes and sprinkles until you reach your breaking point or leave a few ingredients out if you don't have them on hand. Only marinate the shrimp 15-20 minutes so the acid in the orange juice and vinegar don't 'cook' the shrimp. You aren't making Ceviche. 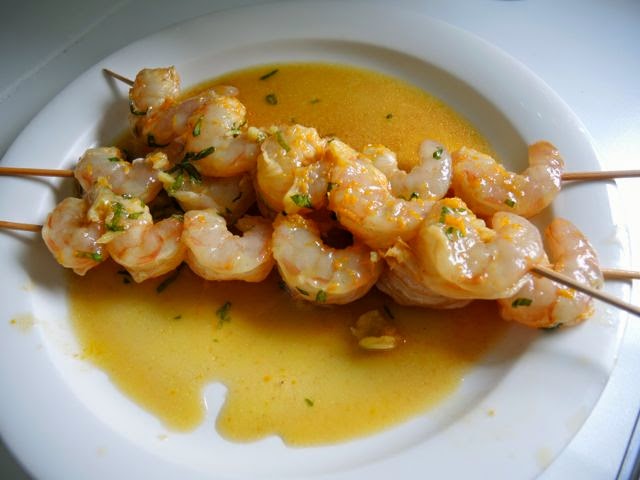 If you have a mandolin slicer use it to make uniformly thin sweet potato slices. They will cook more evenly and help prevent them from burning. 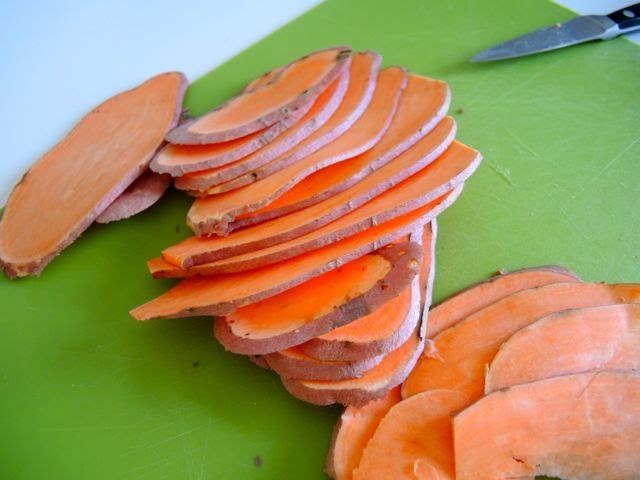 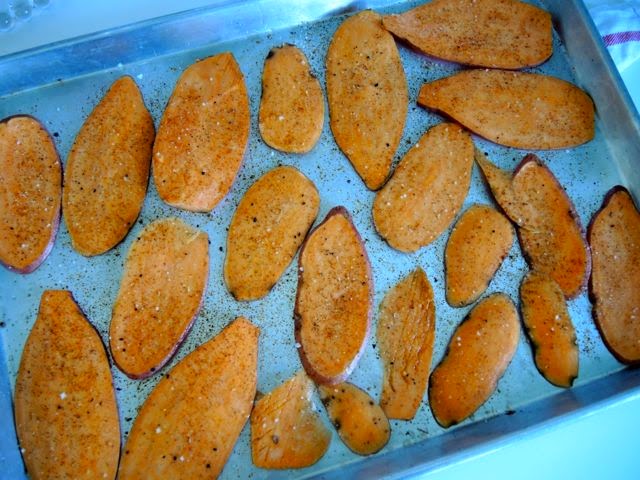 Turn the sweet potatoes over once or twice while cooking so they get crisp on both sides. Watch carefully so they do not burn. I used smoked Spanish paprika and chipotle in both recipes to complement each other.

Put wooden bamboo skewers in water to soak. Remove zest from the orange and juice the orange into a glass bowl large enough to hold the shrimp. Add the olive oil, vinegar, soy sauce, honey, garlic, basil, paprika, and chipolte pepper. Whisk to combine. Add the shrimp. Marinate for 15-20 minutes. If the shrimp are very cold they will be fine marinating at room temperature for a short time. Otherwise cover and refrigerate while the shrimp marinates.

Remove the shrimp from the marinate and thread the shrimp onto the bamboo skewers. Discard marinate. Cook on a preheated and oiled grill for 2 minutes per side or until the shrimp are opaque. Take care not to over-cook. Serves 2.

Preheat the oven to 350℉ (175℃). Thinly slice the sweet potatoes by hand or with a mandolin slicer. If using coconut oil that is solid put the coconut oil on a pan and put it in the oven for a minute to melt the oil. Remove pan from the oven and toss the sweet potatoes to coat. (If using olive oil sprinkle on the potatoes and toss to coat.) Sprinkle potatoes with paprika, chipotle, salt, and pepper to taste. Roast the potatoes in the oven 15-30 minutes (depending upon the thickness) until crisp. Turn the potatoes over once or twice during baking so they get crisp on both sides. Watch closely so they don't burn. Serves 2. Posted by Kitchen and cake at 1:36 PM